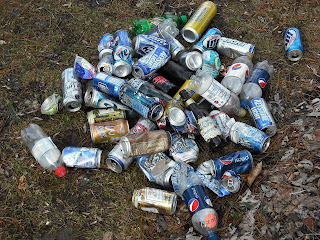 On a 6.5 mile walk along local, secondary roads yesterday I picked up only returnable/deposit containers. The photo shows the number of containers that were picked up along one side of the road. So ...40+ containers x 2 sides of the road = 80+ along a 6.5 mile section of rural roads or about 12.3 cans/bottles/mile x 5,100 miles* of roads in New York State = 62,700+ deposit/returnable container on NYS highways on Wednesday, March 11, 2009.

But what about all of those non-deposit containers such as bottled water, sports drinks that I would estimate would increase the above total by 40% or 2.7 MILLION containers along our nations' highways?

Yow! ... and that does not include the cigarette packages, jumbo plastic and styrofoam plastic drink containers, plastic bags, random fast food paper/plastic/tin foiled products, and other items I have to assume are intentionally dumped by passing vehicles. And all of these items are what I call "15 minute items" or things that you buy and discard after 15 minutes. They are certainly not examples of American manufacturing at it's best!

So as a good American in these depressed economic times, my government is encouraging me to spend and stimulate our economy? Sorry, I am inclined to save the money and make selective purchases of durable, essential, non-luxury, recyclable items that promote good EARTH stewardship.

Some other thoughts that I have:

Posted by Gerry Benedict at 7:33 AM