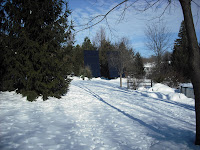 December was a record setting cloudy, snowy month here in the central western part of upstate New York; not idyllic for generating solar electric power! Yesterday after 16 overcaste days, the sun was out and the photovoltaic (P.V.) towers were generating electrical power!
Since the winter solstice was ten days ago and Sue & I had adjusted the angle of the solar panels to recieve the lower angle of winter sunlight more directly earlier in December; I wanted some empiral evidence that the 'angles' were worth the effort. 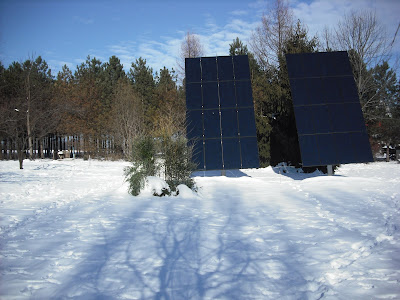 Next I took a profile photo of the P.V. towers (below right); scanned the photo and protractor to measure the angular position of the solar collecting panels - results: 64 degrees. If you look closely in the lower right hand corner, you can just barely see the sting which parallels the angle of the sun's rays ... it is visibly & very close to 90 degrees with the flat solar panel surface. This is not an official geometry proof ...but you can see that there is an advantage to adjusting the collecting panel angle as the seasons (angle of insolation) change. 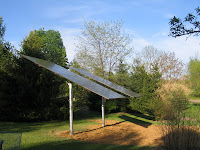 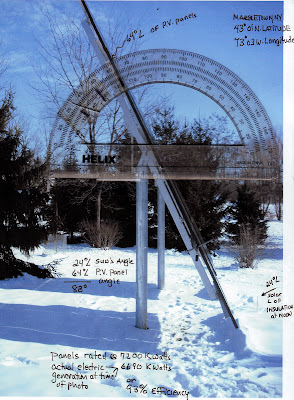 Below is a copy of our on line electrical energy production for the month of December, minus today - 12/31/10. Can you tell that the month was cloudy? You can see that the our P.V. system automatically shut down for a grid power outage on December 14th (See earlier blog post on 12/15).

The video clip is of the inverter display in our basement. The inverter converts the direct current (D.C) power from the P.V. system into alternating current (A.C), before going to the grid. As the display cycles through, you can see the amount of CO 2 kept out of the atmosphere; the number of Kilowatts of power currently being produced ('speed'); the total number of Kilowatts hours produced by our system('how far we've traveled'); the number of Kilowatt hours currently produced for this day ('how far we've traveled today'); and acknowedgement that the two towers ('system is working').

Below is our meter which indicates that electrical power is being produced for our use and the extra is being metered back into the grid.

Below is my attempt to graphically plot seasonal expectations.
I hope it is good for a laugh!
(click on the drawing to enlarge the drawing.) 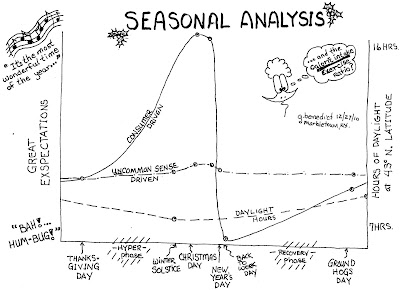 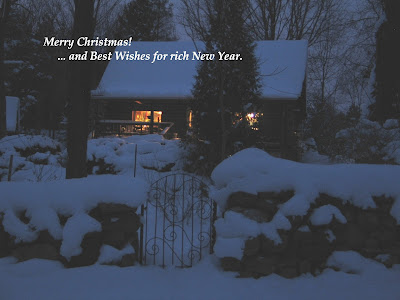 Woke up this morning to realize that the power was out. Since I am an early riser, I assumed that the power was out in the greater Marbletown area. I proceeded to make coffee with the camp stove with light provided by the Coleman lantern and read for a predawn hour while the wood furnace pumped out toasty heat. Since we received another 6-8 inches of lake effect snow overnight, I blew out the driveway in the early morning light.
Still no power!?
It is now about 8am and a quick check with brother Steve, revealed that he had power and he reminded me that if the power were out, the generator at my parents' house would be running.
Hmmmn???
...guess I had better go check the line to my house.
It was fine. Okay, time to check with Kevin next door, since he is "upstream" of our branch joint power line. Kevin was on his cell phone talking to the power company as I arrived and waved me to take a look back down his driveway.
Yup! ... there was the problem.
Solar panels (background) would not turn on with the 'grid' disturbance. 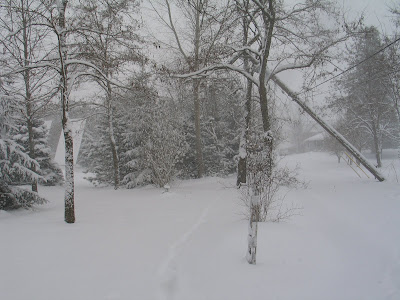 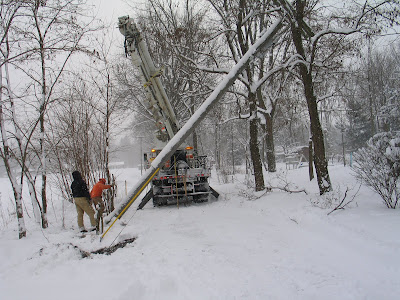 NYSEG crews prepare to raise the old pole, unwire it and rewire the new pole. 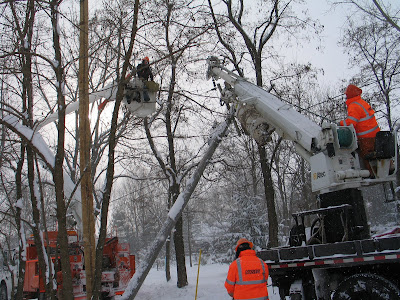 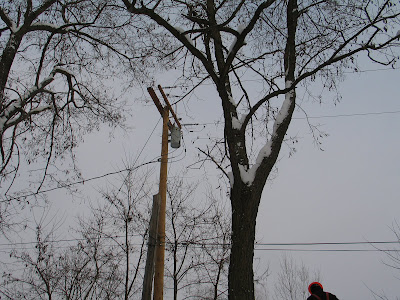 Recalling another time and place

My niece is training to run her first marathon. Sarah's dad, my oldest brother was concerned about his daughters heavy mileage training in a recent phone call. Her training reminded him that I used to run competitive marathons in the 70's and 80's. Although now I walk and backpack miles; the conversation about marathoning reminded me of my first marathon in the spring of 1968 when I was a college Senior at Ottawa (Kansas) University and on the track team.
So I pulled an old scrape book of newspaper clipping and there I am!
(5th runner from the right) 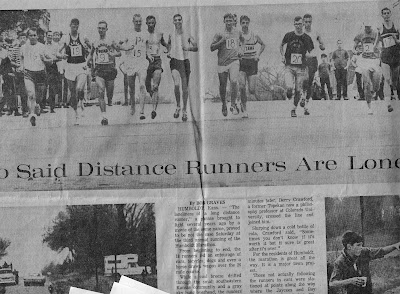 It was the 3rd Annual Humbolt, Kansas marathon. I was not in any kind of shape (mentally and/or physically) to handle the 26.2 mile, straight out and back course in rural Kansas. As the photo shows, the popularity of running a marathon was in it's infancy back then. It was my slowest and one of the most boring marathons of the 18 that I would to run over the next few decades. There were more cows and grass watching us run by then, compared to the cheering crowds on Beacon Avenue when finishing multiple runnings of the Boston Marathon years later on in the mid 70's ... and with much better results!
Posted by Gerry Benedict at 8:02 AM 2 comments: 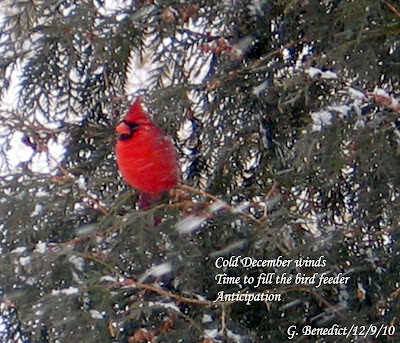 Posted by Gerry Benedict at 9:29 AM No comments:

Lake effect snows have arrived. I estimated that about 6 inches of snow covered the ground this morning by looking out the basement door. When I actually stepped out to shovel the side walk I decided to check the snow fall with a yard stick.

Guess it is time blow out the driveway, after watching Sue drive out to an early morning dentist appointment in town.

Posted by Gerry Benedict at 9:07 AM No comments: