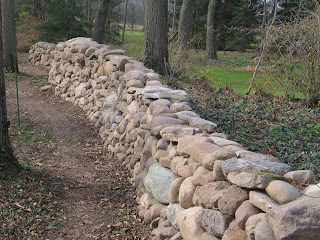 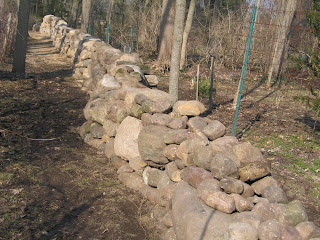 Yesterday turned out to be a mild mid-March spring day. Lots of sunshine, with temperatures in the sunshine pushing into the lower 50's. What to do? ... Well, after looking out the window and noticing the piles of rocks collected in late December, I decided to continue building the free standing rock fence/wall started last fall.


I say "Stoned" in my title because I recieve great mental satisfaction and tranquility during the act of wall building, as well as in the creation that is pleasing to look at after a rain shower/ snowfall, or to view the many prospectives this stone wall provides as I walk around the yard.

However it is in the building that I have the most satisfaction for the following reasons.

Well enough of this "mental state" and back to reality. Today I have decided to go pitch on several loads of horse manure for the garden.

Posted by Gerry Benedict at 8:44 AM