Completing the Western End of the FLT

I finished the 562 mile east-west length of the Finger Lakes Trail yesterday, August 24, 2009. Below is a link that you can click on to view the last segment; a 111 mile backpack. 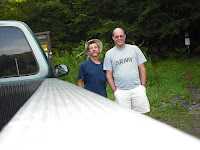 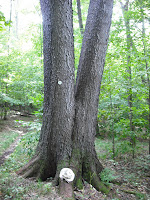 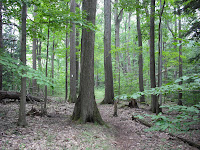 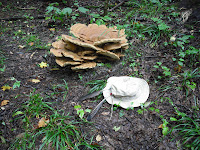 Friday, August 21, 2009
This morning I "dropped" down into the valley to cross under I-86 and the Salamanca Indian Reservation, before walking up into the hills of the Buckthorn and Rock City State Forests. The Little Rock City Picnic Area was an interesting maze of rock and channel formations that would be a wonderful place to take kids and "adult kids" on an adventure picnic. I set up my tent outside of the DEC picnic area near an old CCC camp. [23 miles] 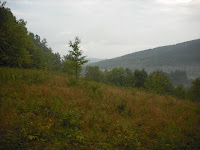 Dropping down to cross the Allegany River near Salamanca 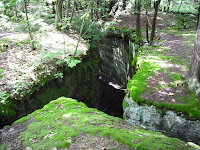 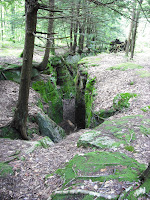 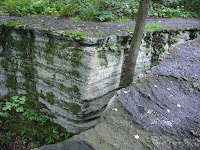 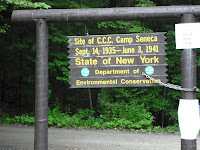 Saturday, August 22, 2009
Some "critter" ran off with my spoon!!! ... so had to eat my oatmeal and all following meals with a fabricated stick or my hand. Licking like a dog also worked. Today was a hard hiking day of repeated, steep ups and downs crossing the McCarty Hill State Forest; looping behind the upper slopes of the Holiday Valley and Holimont Ski Areas; multiple wrong turns and backtracks; and finally acrossed the Boyce Hill State Forest where I spent a restful evening in my tent next to large beaver pond. [24 miles] 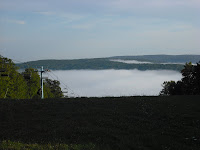 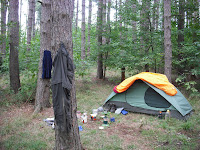 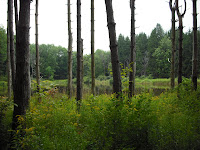 Bivouoac Boyce Hill State Forest
Sunday, August 23, 2009
The terrain was flatter today with more of the route along roads. Roads are faster, but the pounding takes a toll on the feet. I was making great time until huge "blow downs" covered the trail in the Bush Hill State Forest. I am glad that I am wearing long pants as many areas of the trail are overhung with late summer growths of brambles, nettles, and multi-floral rose bushes. I set up my tent at a bivouoac area outside of Higgins, NY. There was "no network" so I was able to place a land line call to Sue about my progress and pickup due to a kind local couple interested in my backpack journey. [29 miles]
Williams Road, Allegany County, NY 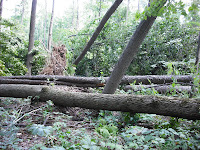 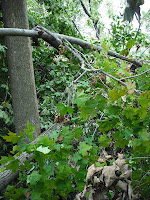 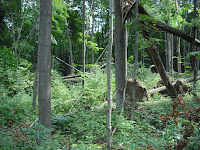 Blow down!
Monday, August 24, 2009
Started early across a large Amish families horse pasture and into woods laced with horse and wagon "foot prints". Amish lumber harvest seems to be a thriving industry in the area. Again many of the trail markers were covered with summer growth or faded, so I lost time searching for the trail several time times today. Arrived at Whiskey Bridge which crossed the Genesee river just south of Portageville, NY where Sue was to pick me up ... but where is Sue? After an hour I began to conclude that my wording as to the "pick up point" was confusing. Turns out Sue was waiting at the bridge crossing the Genesee river on the north side of the hamlet, 1.5 miles to the north of where I was waiting. [17 miles]
Views on the last day's trek. 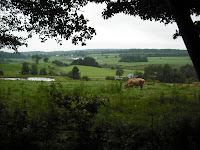 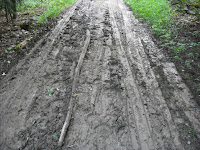 Amish horse and wagon tracks in the forest. 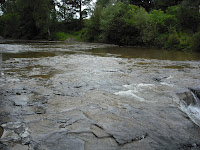 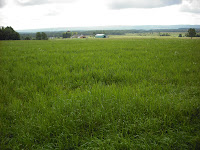 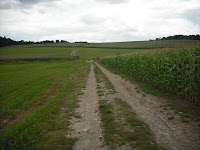 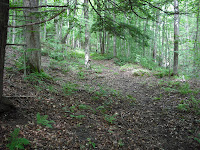 Only 3 more miles to go! 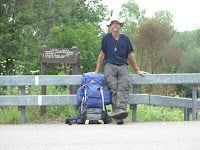