Below is a pile of finished compost made from last year's yard leaves. This compost contains no vegetable garden plant residues or weeds; so I am planning to use this compost on our 2011 vegetable garden to reduce the chance of introducing weeds or plant diseases. It is very nice material. 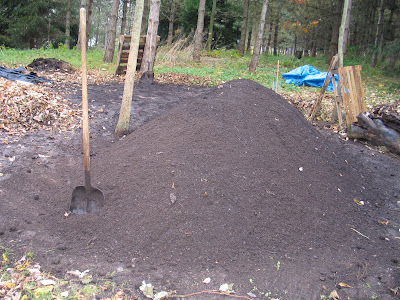 The pile was then covered to reduce the chance of nutrient loss over the fall, winter and early spring. I hope to send a compost sample into Penn State for complete nutrient analysis sometime this winter. Stay tuned! 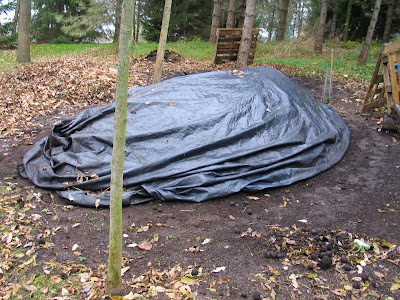 Currently I am raking leaves and stacking them into a new pile shown below. A year from now these leaves; after I have turned the piles several times, will look like the finished compost in the top photo. 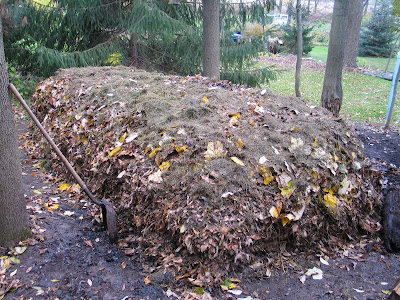 Posted by Gerry Benedict at 2:22 PM No comments:

I just returned from a 9 day backpack to the complete the northern third of the Long Trail in Vermont's Green Mountains. It was a fun, but exhausting trip that trekked along Green Mountain ridge line over the highest Vermont peaks. The trail was rugged; requiring boulder hoping and/or climbing, slogs through mud (...I packed only one pair of socks and my feet were wet 6 of the 9 trekking days) and walking through hardwood (maple, beech, yellow birch) and spruce forest. I drove to North Troy, Vermont just south of the Canandian/US border were Bob Prong (... a former math teacher at Midlakes H.S.) gave me a ride to the trail head at Applachain Gap (Vt Rt. 17). This was were Jason and I came off the Long Trail a month ago (...see blog post on September 8th). The hike was 120 miles long. The nights were cold, but the foliage and scent of fall were exhilerating.

Below are a series of random photos that will give you an impression of the trip. 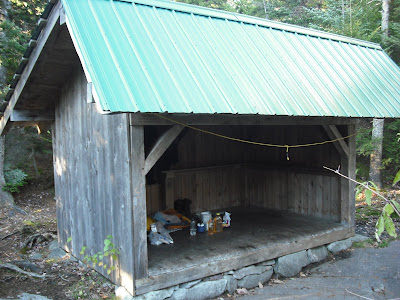 Nights were spent in trail side shelters. 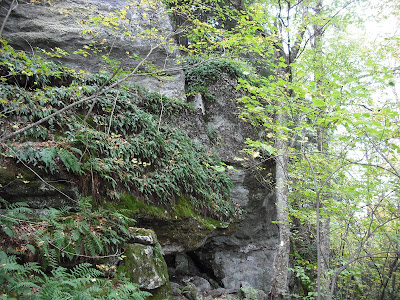 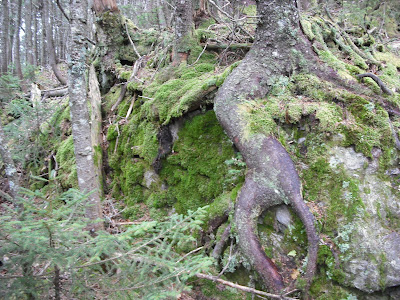 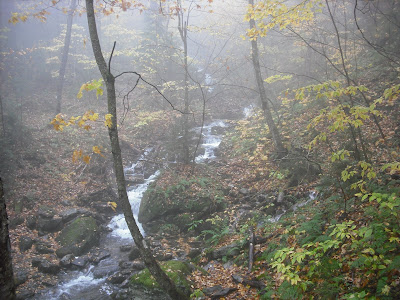 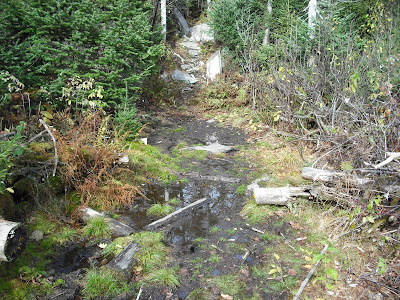 Muck, water and besure to stay on the trail = wet feet 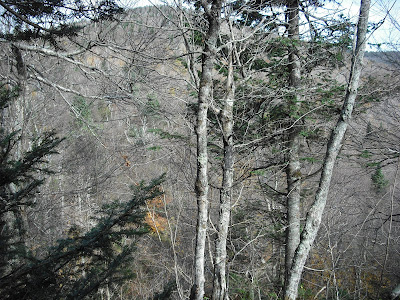 Walking the Green Mountain ridge line continuous ups, downs, and back up over the next peak or "bump" meant a 300 - 600 ft elevation change to get from where the photo was taken to the top of the next peak or bump as shown in this photo. 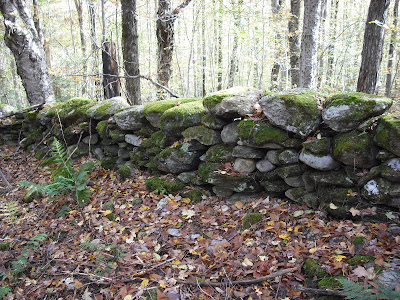 The occassional evidence of past life in the Green Mountains 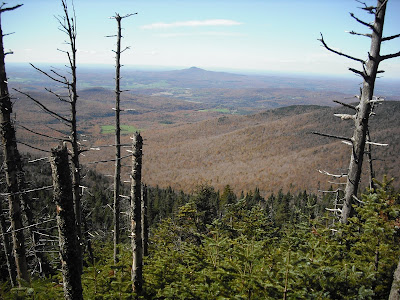 A view looking north into Canada on the horizon. 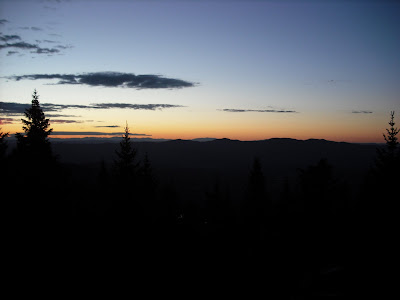 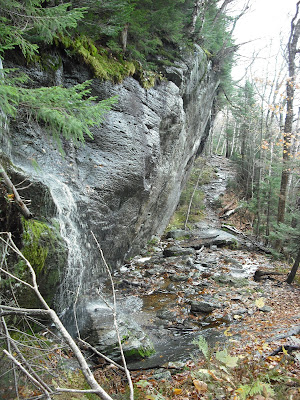 Ascent of Mt. Laraway required a walking along this mass of rock, dripping with water. 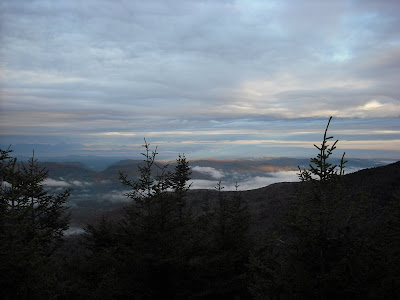 Looking north early in the morning. 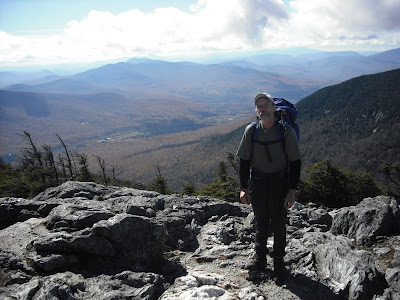 Atop Jay Peak. My journey began beyond the furthest point visible in this photo over my head. 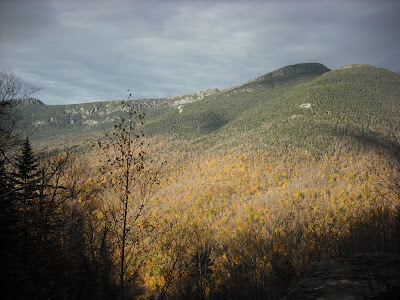 Looking back at Mt. Mansfield after crossing Smuggler's Notch. When I crossed Mt. Mansfield the day before, the winds forced me to stagger left & right in order to move forward, while be pelted by a driving rain, followed by stinging pelts of graupel (...BB sized pellets of snow) which turned the mountain top white. I found my self reviewing the signs of hypothermia as I desperately wanted to get off that mountain top... alive. 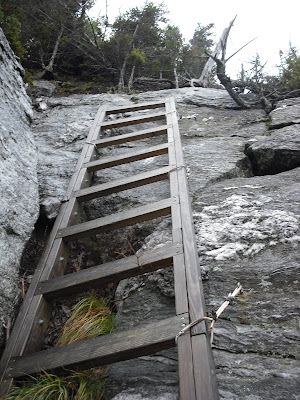 Ladders enable passage over some of the steeper trail sections. 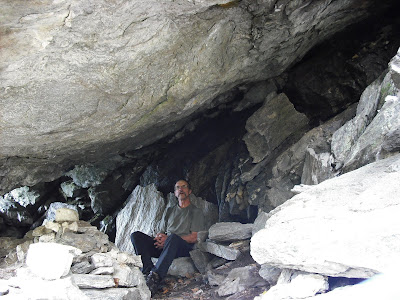 Hikers had place rocks into lounge chair positions under a huge boulder. 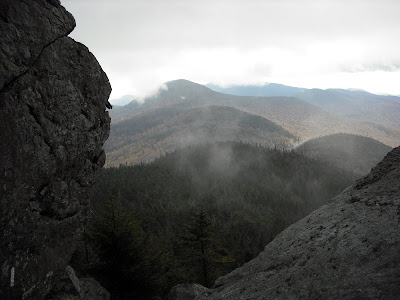 Looking back as I ascended "the Camel Hump". 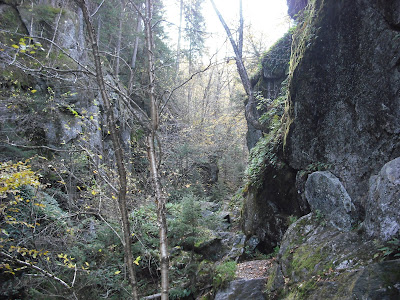 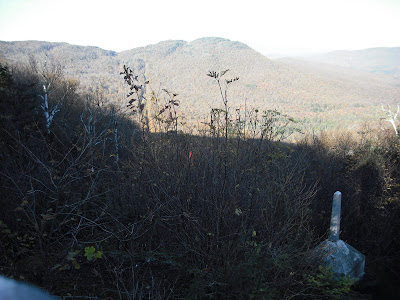 The US/Canandian border established in 1848 is just a line cut across the forest with markers. On my hike from the trail head back into North Troy to my truck, a US Border Patrol Officer stopped me to just check who I was and where I had been.

The video clip below is a typical view trekking along the Long Trail.
The following 360 degree video clip was taken from Mt. Belvidere.
Posted by Gerry Benedict at 6:00 AM No comments: